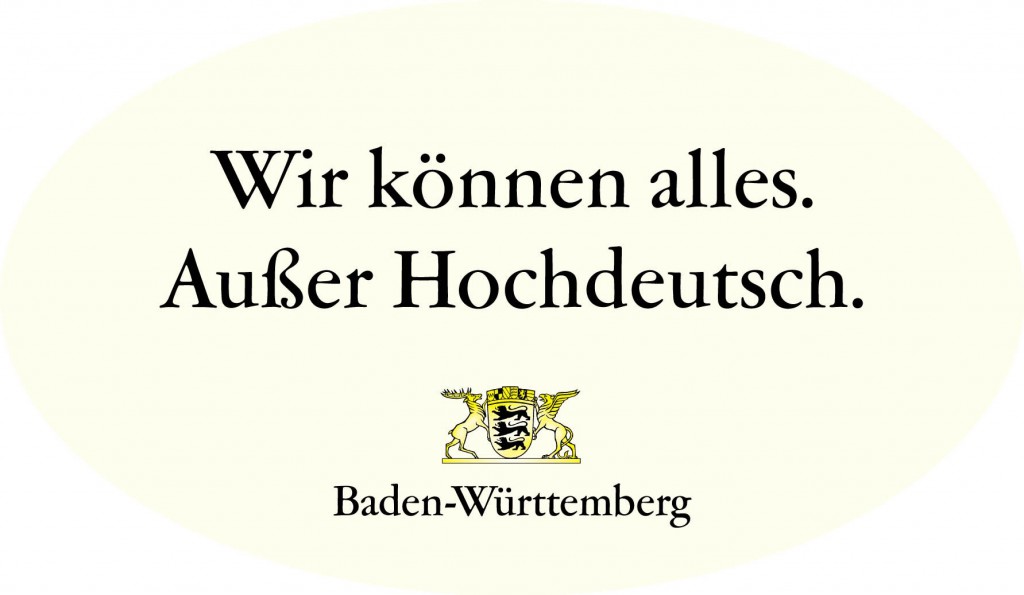 5 Things You Need To Know About The Swabians

1.       There are 8 million Swabians living in Germany. Most of them in the federal state of Baden-Württemberg in the South, some even in Bavaria. We call the area we’re living in “Ländle” (dialect form for small land). The capital of the “Ländle” is Stuttgart.

2.       We speak Swabian, a German dialect mostly not understood by other Germans. Example? Jam in standard German is “Marmelade”, in Swabian we call it “Gsälz”. And we love that no one understands us. We even have an advertising campaign with the slogan “Wir können alles. Außer Hochdeutsch” which means: “We can do anything. Except (speak) High German.”

3.       We can do anything! We invented the car, the newspaper, bras. Albert Einstein was Swabian, we have Mercedes, Porsche and we have the Swabian “Kehrwoche”, a house cleaning tradition which ruins every Saturday. But our houses and sidewalks are really pretty clean.

4.       They say the Swabians are the ‘German Scots’. Well, we’re not stingy but one of our leading life mottos is “schaffe, schaffe, Häusle baue” which means: “work, work, build a house”. So yes, we are the thrifty and hardworking Germans.

5.       But we also know how to party. Twice a year there’s a big funfair at Cannstatter Wasen in Stuttgart and the one in autumn is the second largest beer festival in the world after the Oktoberfest in Munich.

And I haven’t even started talking about the tasty food, the “Spätzle”, the “Maultaschen” or the “Butterbrezeln”…

One last thing you have to know about the Swabians: “Net bruddelt ischt gnug globt” which means: Not complaining it’s the biggest compliment you’ll ever likely to get.

And yes, I do also speak standard German. And yes, I’m happy living in Berlin without the Swabian “Kehrwoche”.

What do you know about the Swabians?

Previous ArticleThe Good, The Bad And Copenhagen
Next Article The Sky Above Me – Copenhagen November 2010