Thousands and thousands of ants peeing on me. And suddenly I’m not nervous any more. I try not to watch the monk. I don’t know if I’m allowed to. So I look around. The old man with the tooth gaps who had been accompanying us since we arrived, gives me a thumbs up and nods. Another man who I thought is meditating starts snoring. I hear a sound which reminds me of the tattoo sound I know. It’s a battery-powered mini fan which hangs in the baby buggy in the room. Does it hurt? Kind of. But it feels different. The thousand ants are crawling through my whole body now. 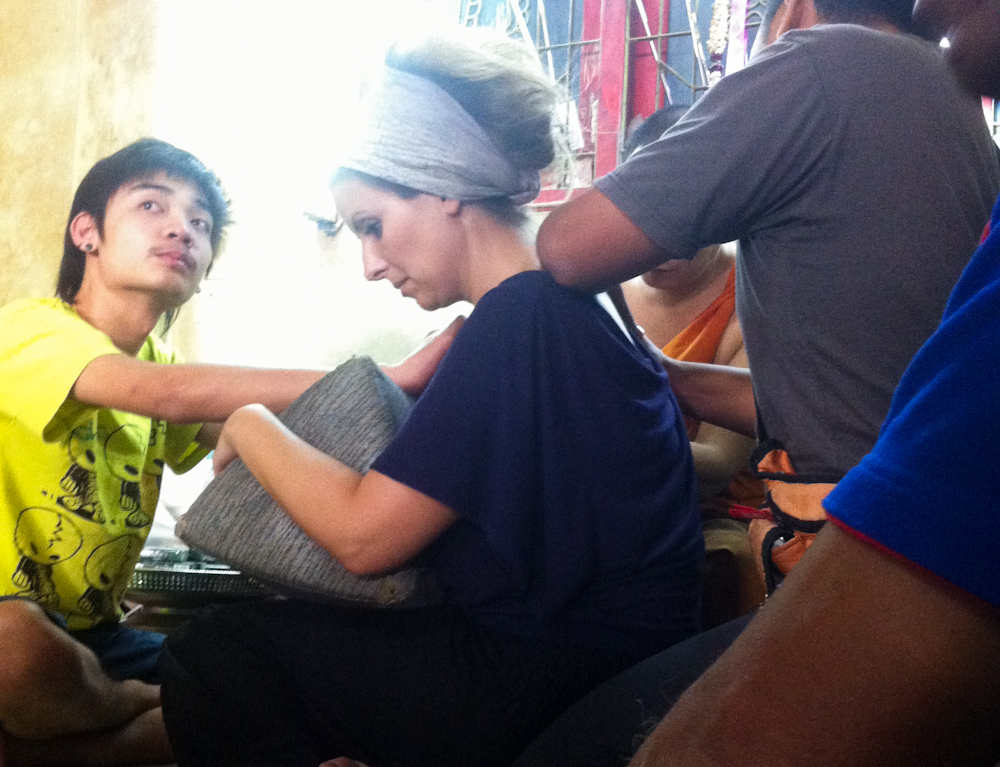 Ten minutes later the hurt is gone, the two men, who were holding me tight let loose. The monk starts to whisper. I’m trying to listen. I don’t understand a single word. He’s blowing onto the tattoo. Then he’s whispering again. One more blow and then it’s done. My Sak Yant is blessed and he blew the magic into it. The old man signals that I am to leave the room. One last look, the monk is staring at me, I think he is smiling. 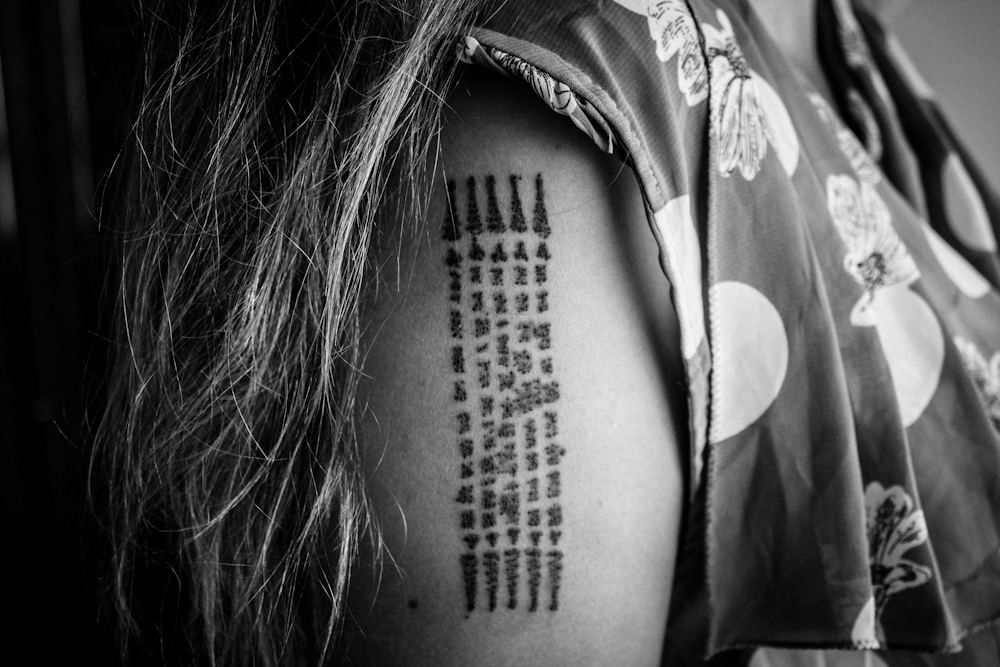 I wasn’t sure what this day would bring when I got up early oh so early in the morning. I know that women can also get a Sak Yant. But the monk decides on the design and the location. He looks at you and then knows what you’ll need. Protection against evil spirits, strength, health. What will it be for me? I really want him to decide. Also the location. There’s just one problem: on my back, which often gets chosen for the first Sak Yant, there’s no space left. 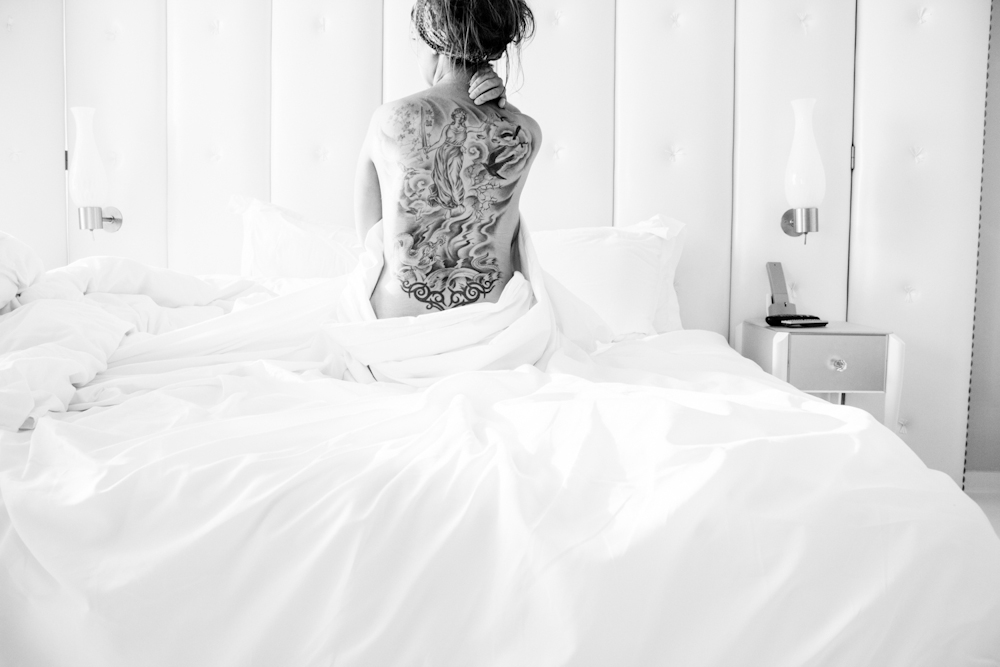 My back is full of everything I believe in. Justice, that everything has two sides and that good and evil are kind of the same. Everything has its meaning. It’s a long story. I will tell you once we meet up. But for now I just want you to know that tattoos are not just decoration for me. I actually thought it would take years until I got my next tattoo. And then I heard of Sak Yant. Tattoos, done for hundreds and hundreds of years by monks, which will protect you. Magic tattoos. And I know, this is it. 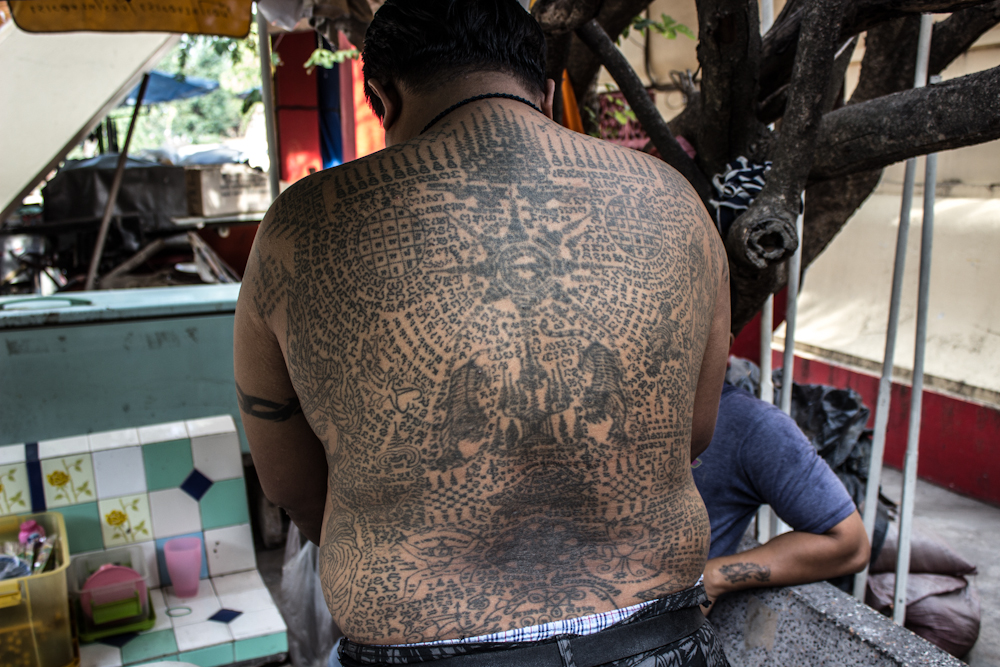 And so I’m holding close to this man who smells like old sweat and cigarettes on this Monday morning while we’re speeding on his motorbike through fields in the back-country of Bangkok. Sun is rising blood red above the rice fields, airstream is making me cry and I think: This is one of those perfect moments. A moment which will make you dizzy and giddy for years and you’ll think, this did not happen to me, I saw this in a movie. But it’s real. 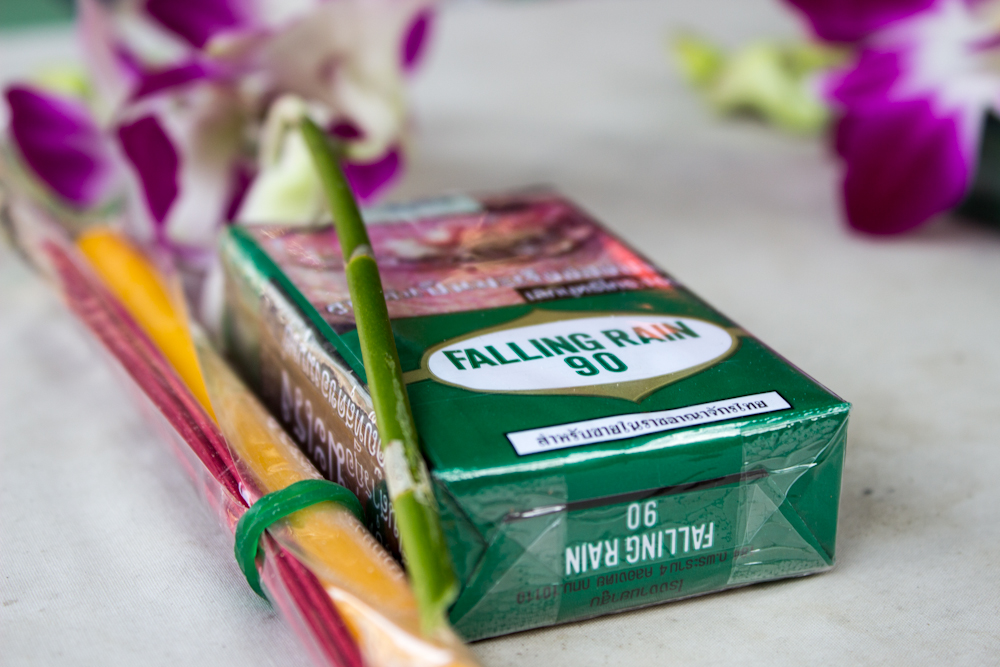 Moments later I sit in a shabby room in the “Temple of some monks”, the Wat Bang Phra. The offerings for the monks include menthol cigarettes, a candle, incense sticks and an orchid. 50 Baht. € 1,20. Men are sitting next to me discussing where my Sak Yant could fit onto my body. They are laughing. They are rolling toilet paper into little bundles. They know what they are doing. I don’t understand a single word. Kristin and me are the only foreigners. Probably the men think we just want the same tattoo like Angelina Jolie. We don’t. We want the real thing. Once the monk arrives (who is the famous Luang Pi Nunn, but we don’t know back then) everything goes very fast. No discussion. He decides. We both get the Sak Yant Angelina Jolie has. Kristin gets it on her back, and I get it on my right upper arm. Yant Hah Taew. 5 sacred lines. The most comprehensive and versatile of all the Yants. It can include loving kindness, charm, good luck, success in all aspects of life, protection against evil spirits and banishment of bad luck. The five lines are small sections taken from Buddhist prayers. I can’t read them. I’m not sure what they mean and which actual blessing they include. But it feels good. And one day I will find someone who can translate them for me. 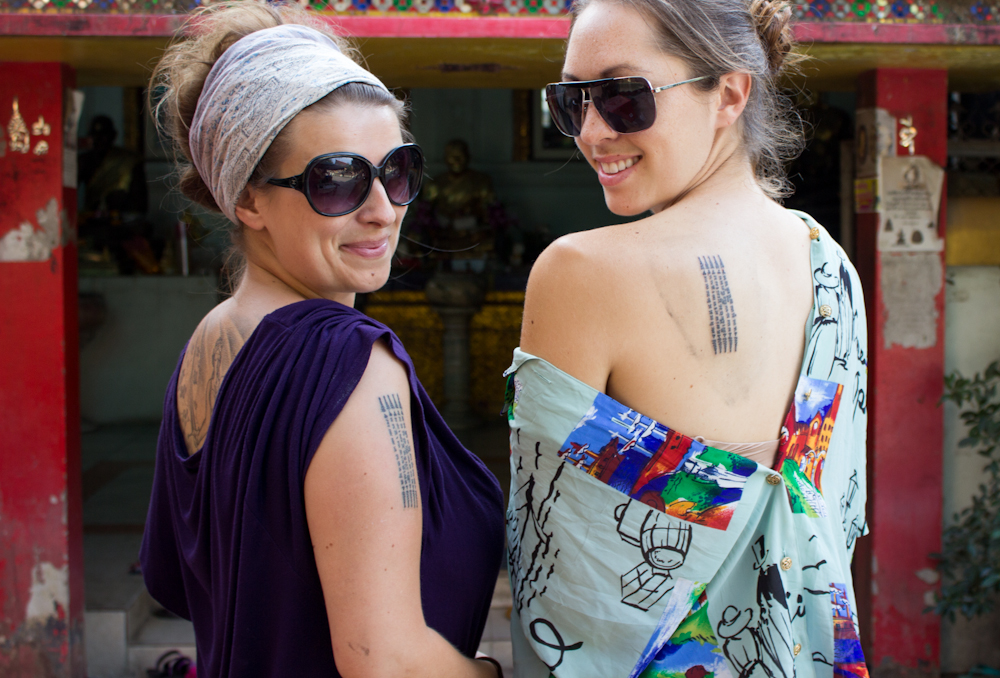 Health Risk: Although Sak Yant is generally known as Bamboo Tattoo, our monk didn’t use bamboo sticks but a 50 cm long metal stick. It was disinfected in a liquid which could be water or alcohol. As far as I know he used the same stick for everyone. At least he did for Kristin and me. Yes, there’s a risk. But I couldn’t find any information concerning cases of HIV or other STD infections caused by a Sak Yant. But yes, there’s a risk. But one day you will die one death, and I think if I will die because of a sacred tattoo that’s way cooler than getting killed in a car accident. Maybe my Sak Yant is protecting me exactly of this. 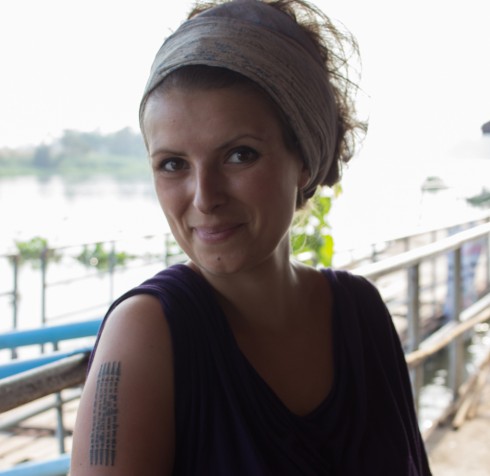 Costs: Besides the transport costs, we spent 50 Baht for the offerings and gave a 110 Baht donation in cash. That’s about € 4.

How to get there: You can’t make any appointments, that’s why you have to go there as early as possible in the morning. We took the 6am bus from Victory Monument in Bangkok to Nakhon Chai Si district for 60 Baht. Tell the driver you want to go to Wat Bang Phra, he will drop you off somewhere on the highway. Cross the pedestrian bridge from where you’ll already see the motorbike drivers waving at you. They will know where you want to go. You’ll pay around 100 Baht per motorbike. Do it and don’t take a cab! When you arrive at the Wat someone will show up sooner or later to bring you to the right building, where you can buy the offerings and wait for the monk. When we arrived it was around 7:30 and we were the first, that’s why we were also first to get our tattoos. The room was filled with around 15 people when we left. If you arrive later you have to wait in line until it’s your turn. You can find more information on Where Sidewalks End.

Does it hurt? Yes, but I thought it was less painful in comparison to my other tattoos. Could be because of the method, could also be that my upper arm is less sensitive than parts of my back.

Would I do it again? Yes, yes and once more yes. Especially as I didn’t know back then, that there are special rules of abstention with each Sak Yant. I don’t know my rule. Nobody told me. Nobody there did speak English. But I would love to know. Until then I imposed my own one. To speak the truth no matter what. Holy Shit!

SAK YANT guided EXPERIENCE
You’re thinking about getting a Sak Yant, but you’re not sure if you can do it on your own, have some more questions or want a translater to accompany you? No problem! My friend Ian offers help! You can book your very own Sak Yant experience here.

Once a year there’s a very special festival happening at Wat Bang Phra: Wai Kru. 10.000 people go there, actually to recharge the magic in their Sak Yant, but some of them become possessed by the spirits within their Sak Yant. A magical experience I definitely want to see one day! If you want to see this too, you can book this tour here.

Are you thinking now about getting your own Sak Yant? 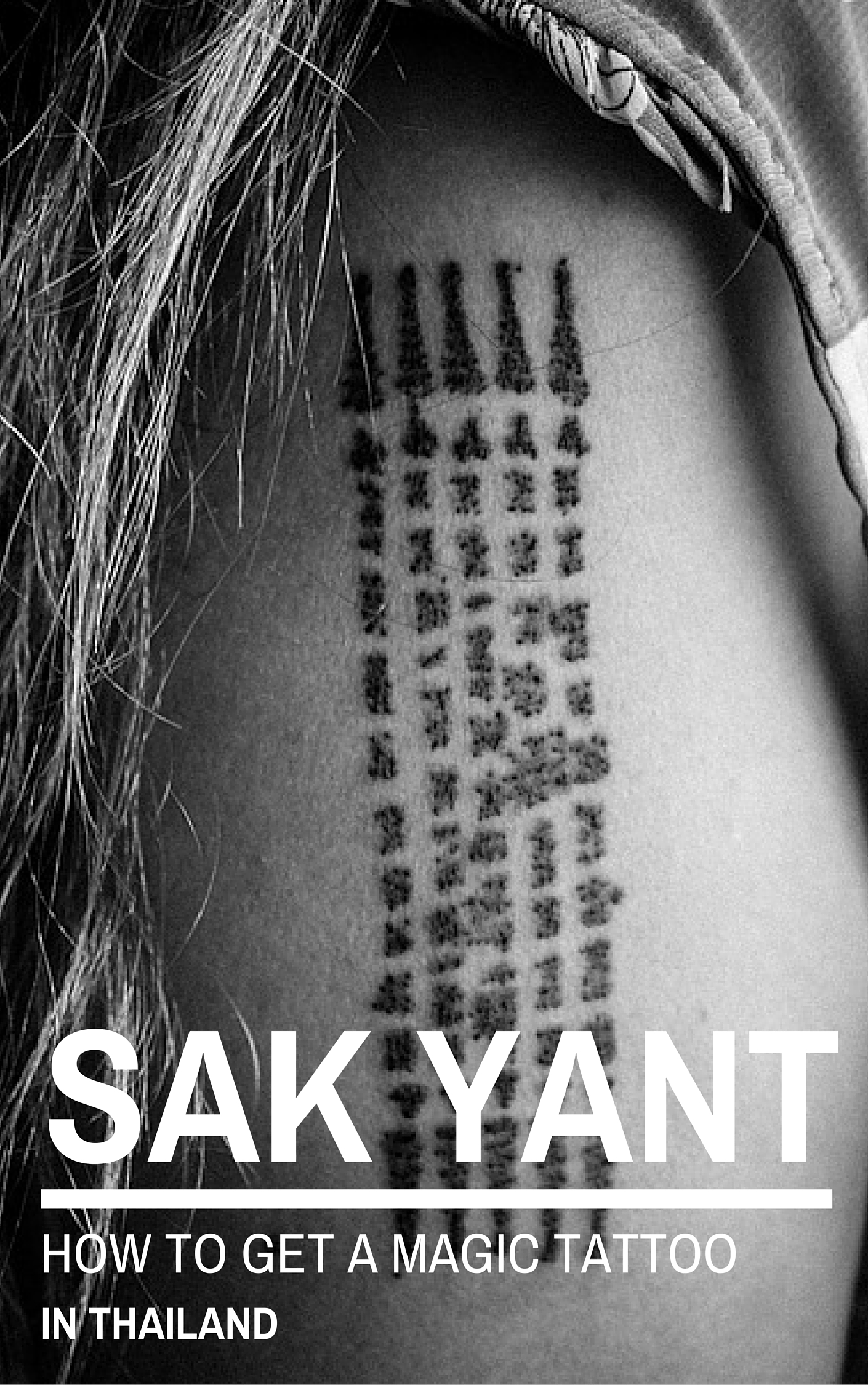 Previous ArticleThe Ultimate Packing List for Mongolia
Next Article This was 2012 – Don’t cry because it’s over!