“Hi, do you know what day is today?” “Friday” “Yes, Friday, that’s my name. Today is my name” He was all smiles. “Can I take your picture?” I laughed and thought it’s funny that he want to take a picture of me. When he showed me the pic I couldn’t really see anything. The phone was small and the sun was low. “You like it?” “Yes, I like it.” I wanted to be polite. Friday started to giggle. “Look, look. there’s no picture. My phone has no camera!” He showed me his phone again. And there, where I thought I saw my face, I now saw clearly a graphic of a stick man. And then, we both laughed. I met Friday on a Friday in Jordan. In Wadi Rum. His friend Ali was our driver and took us on a ride through the desert. We passed rock formations which looked like bridges and ships. And rumour has it there’s also a rock that looks like a mushroom. But we didn’t pass that one. 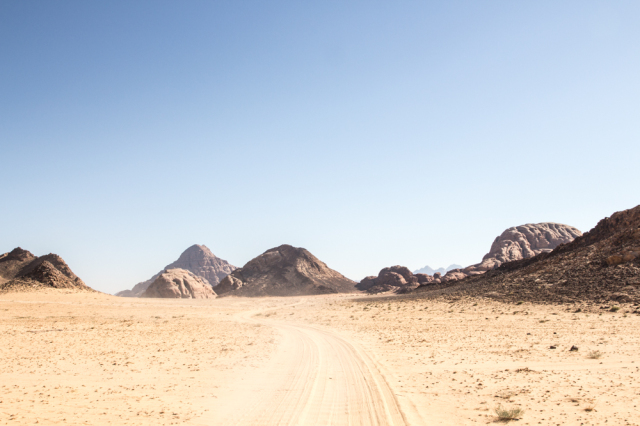 Wadi Rum is one of these deserts you have to see. It’s a UNESCO World Heritage Site and always has been inhabited by bedouins. In World War I these bedouins fought alongside T.E. Lawrence (better known as “Lawrence of Arabia”) during the Arab Revolt. And at least since the Oscar-winning Movie “Lawrence of Arabia”, Wadi Rum is world-famous. “Do you want to ride a camel?” We stopped close to the “Big Bridge” and our guide waved a bedouin to come nearer and told him to bring three camels. For the guys. Because I, I prefered to drive a 4×4 across the sand. As we know, camels and me, that’s never a good story. Eventually our driver Ali agreed and I entered the driver’s seat. The fact that I’m German, was good enough for him to give me the keys. I have to admit that always helps. “Do you know how to drive a car with stick shift in the desert?” “Well, I’m German.” And bam, you get the keys. Good thing no one ever asks me about my parking skills… “How fast can I go?” “50 or 60!” For a second I was disappointed I wasn’t allowed to go faster, but I realised quickly why. The paths in Wadi Rum are, well, uneven. One second you drive across sand and in the next second you feel hard stone under the wheels. But I had fun, was even a bit drifting (unplanned – but SKILLFULL! I was so proud of myself!) across the dunes and eventually got stuck in the sand. The clutch was stinking and I felt bad about it but Ali was just laughing and brought the car in seconds back on track. 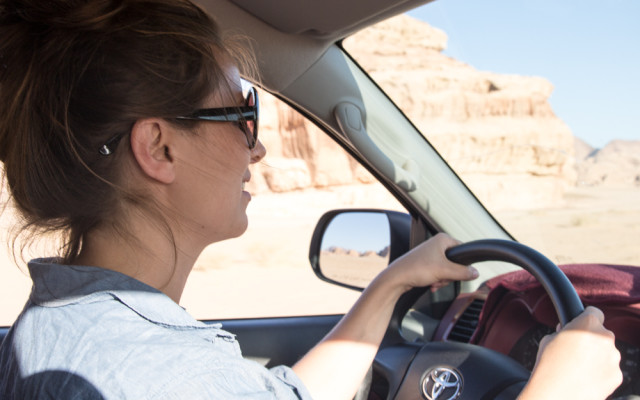 Then we arrived in Rahayeb Camp, where we stayed for the night. A camp in the middle of nowhere and though equipped with everything you need. But electricity, that was switched off at one point. I think it was around 10pm. But at that time I was sitting under the stars, counting shooting stars and thought to myself, the night sky is nowhere as beautiful as it is in the desert. The camp early in the morning

There’s just one thing I regret. That I wasn’t witty enough to reply with “And I’m Robinson” when Friday introduced himself to me.

Disclosure: This post is part of the #GoJordan campaign created by iambassador in cooperation with VisitJordan.

Previous ArticleNext stop: Jordan
Next Article A story about skydiving, boredom and me